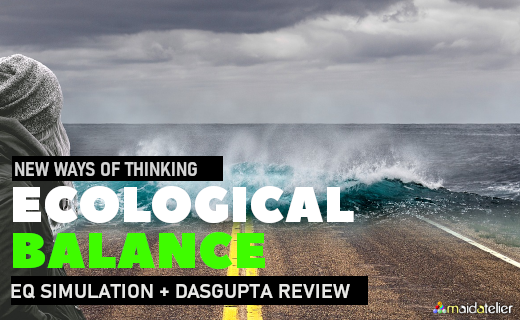 After 2 years of research commissioned by the British government, the report “The economics of biodiversity” conducted by Dasgupta Review of the University of Cambridge, was published on February the 1st: an outlook over the new economic frontier.

The report constitutes a new and important piece for all those economies which, albeit with a long delay, are beginning to question the possibility of an “ecological transition”; among these economies also the Italian one, given that in Italy so far the question has remained hovering on the edge of the drawers of a few enlightened politicians, today seems to want to get out of it after a timid attempt by the “Conte bis” government and now following the declarations of the new premier Draghi.

As made evident by my recent EQ Simulation Project, currently the population is using more resources than the planet can regenerate; precisely to meet current human needs without affecting the bio-capacity of the planet, today we would need 1.6 planets Earth. In practice, we are overcoming the biological balance (overshoot) of over 60% of the planet’s regenerative capacities. But this is the classic “chicken average”! Actually there are nations with large reserves of bio-capacity (which therefore consume resources to a lesser extent than their regenerative capacity), and other countries that voraciously consume their resources and also some of others, and even more.

What kind of scenarios?

The EQ Simulation highlights how for example Italy has an EQidx (which to be healthy should be between 0 and 1) of 4.27. What does this mean?

1) That if everyone in the world had the lifestyle of the Italians and the resources of the Italians, 4.27 planets would be needed to meet their needs.*

2) That if we were to live in a Planet Italy (thus excluding the rest of the world), Italy would have 4 possible areas of solutions to reach a situation of ecological balance; that is to ensure the same conditions for future generations:

b. Reduce the per capita ecological footprint, and therefore (although not necessarily to the same extent) consumption by the same percentage (-76.6%)

c. Increase the bio-productive efficiency of the territory by 326.3% (practically quadruple it) d. Take actions to obtain a mix of the 3 previous results, thereby reducing population and consumption to a lesser extent than the previous points, and increasing bio-productive efficiency to a less drastic extent. In addition to this we should think not at country level but in global terms instead. That means there always will be countries in bio-capacity deficit even if to a lesser extent, and others that will always have bio-capacity reserves (see. BMFH Simulation)

In reality, all of this is in fact unattainable in the medium term; today we have really “overstepped” and this is the situation of many of the more developed countries. However the report “The economics of biodiversity” basically suggests that a path is possible as long as we are able to undertake it as soon as possible, and that our economic model is not only outdated, but MUST be overpassed in this direction. The UN 2030 Agenda remains an indispensable guideline for economic, political and intergovernmental actions, but that’s not all… the change of pace we will do only by transforming the current paradigm with a real “ecological transition”.

The carefully crafted report “The economics of biodiversity” of Dasgupta Review, underlines this critical point: overshooting is not only precipitating biodiversity, but also the human economy. It clarifies the need to remain within the regenerative capacity of the planet. And the implications are unequivocal: we measure the wrong things, and we underestimate nature.

The importance of the ecological footprint and measuring bio-capacity is strongly emphasized. This report is even more powerful because it is issued by a finance ministry and written by a respected economist rather than a member of the environmental or scientific communities. All in all the most interesting thing is that in this report the economy is clearly treated as a subsystem of the biosphere.

The assertion that the economy is a subsystem of the biosphere, and that the finite nature of the planet also contains the economic possibilities of humanity, inevitably leads to a clash between traditional economists and those ones who have been painstakingly trying to change in recent decades the face of the economy, recognizing this new paradigm as the starting point for any new economic model.

The Economist also highlights this important relationship, and this is a great step forward; it means that resistance to change is beginning to crumble. For those who truly believe in a possible way to a more sustainable world, I definitely recommend taking a look at the Dagupta Review report!

Inspired in some parts by a Global Footprint Network review.

* applying the same reasoning for the United States we instead discover an EQidx of 2.19. It’s better than the Italian one, despite ecological footprint (which is to be considered also an indicator of consumption) is almost double. That’s due to the biocapacity of that territory which is currently triple.